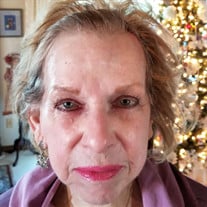 Joyce "Kaye" Sampels - 1/15/43 to 4/24/22 Kaye was born Joyce "Kaye" Groves to Clyde and Reba Groves, on January 15, 1943, in Princeton, Indiana. After Kaye was born, her parents and her older brother Don, moved to Charleston, Missouri as her dad was offered a better job. Not that long after they moved to Charleston, her mother got very sick and later died when Kaye was 2 1/2 years old. After Kaye's mother died, her father remarried very quickly and they subsequently ended up having 3 children (Wayne, Deanna, and David). Kaye loved being an older sister taking care of her siblings. When Kaye was about 16 years old she met Jim Anderson. They dated and goofed off cruising around Charleston with her Aunt June, who was her Stepmom's baby sister and was only a few years older than Kaye. Kaye and Jim ended up getting married when Kaye was 18 years old. Almost immediately they decided to move to Southern California. After Kaye got settled in Caifornia, Kaye worked part-time for Galpin Ford and was their bookkeeper and office manager. Kaye was 22 when she became pregnant with her daughter Lisa. Things were going okay with she and Jim, but then things weren't working and even though they were married for several years, it ended in divorce. Kaye didn't date for several years after that happened. When she did start to come back out, she started taking Square Dancing and Tennis lessons. Then she met John Juday, they dated for sometime. Kaye wanted to live in a better area, as Southern California was getting very crime ridden and smoggy. John's mother lived in Woodburn, and after coming to visit, Kaye agreed to move North to Oregon in 1979. . So when Lisa was about 13 years old, they came to the Northwest, where we have been for the last 43 years. Unfortunately, John Juday suddenly died. Approximately 9 months after John Juday's death, Kaye met John Sampels. Within a few months after dating, they became engaged and were married the following Februry 26, at the Fort Lewis' Army Chappel in Tacoma, Washington, then going up with a wonderful dinner at the Space Needle to mark the occasion. They were married for almost 26 years. John just passed on January 4, 2019. Kaye was truley heartbroken with the loss of her best friend, love and husband. Reflecting back upon her school years, Kaye was very devoted to God at an early young age. When she was in hi-school, she was in the Glee Club, she played the piano, sewed (making most of her own outfits) and Home Economics. When she was in hi-school, there was a contest for the best well-made clothing article. The winner would get a Scholarship to college, and Kaye won! But the other side of the coin was that she wanted to get married to Jim Anderson, and that is what she did instead of going to college. Not that long after that, she met John Juday. John had been down in Southern California for several years and worked as a Machinist and at that time he worked for one of the largest machine shops in Long Beach, California. As John's mother lived in Woodburn, Oregon, they both came up here to visit and decided that wa the area that they wanted to live in. So Kaye and Lisa packed up and moved. Kaye married shortly after she moved here and they were married for 13 years until he had an untimely death in January. Several months went by and in August/September, she was introducted to John mpels. Kaye had for years worked in Human Resources and administered benefits for State Farm Insurance Regional Office in Salem, Oregon.She also worked as a Bookeeper and Office Manager for Galpin Ford in Southern California for several years. Kaye has been retired since she was 57, which allowed she and John to travel the world, which they did having so many adventures! Kaye is preceded in death by her husband John, her mother Reba, her father Clyde, brother Waye, sister Deanne and is survived by her daughter Lisa (Ed), granddaughter Megan, grandson Joel and brother David.

Joyce "Kaye" Sampels - 1/15/43 to 4/24/22 Kaye was born Joyce "Kaye" Groves to Clyde and Reba Groves, on January 15, 1943, in Princeton, Indiana. After Kaye was born, her parents and her older brother Don, moved to Charleston, Missouri as her... View Obituary & Service Information

The family of Joyce Kaye Sampels created this Life Tributes page to make it easy to share your memories.