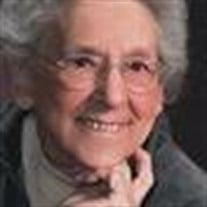 Kathleen Conroy was born in Lewiston, Idaho in 1921, the second of three daughters. She spent her younger days there before her family moved to Portland. As a child, Kathleen spent summers in Seaside and later returned every year with her children. She started her first job at Interstate Tractor, as a secretary. She didn’t like her original job, so she typed as loud as she could so they would move her to a payroll position. She paid her way and graduated from Oregon State College, and while there, served as president of Alpha Delta Pi. She married Robert Conroy at age 27. They moved back to Portland where they raised seven kids followed by seven grandchildren and had one great grandchild. Kathleen went on to serve as a secretary at the Greek Orthodox Church for five years, then took a position at Lewis and Clark College, in the Graduate Studies Psychology Department. She worked at this job and retired at age 81. They called her back to work part-time for another year or so and then retired again at age 83. Kathleen traveled worldwide including trips to Russia, Japan and Australia. She expressed her artistry in drawing, painting and knitting. She found joy in piano and organ playing, dancing, making and collecting dolls. She recorded everything. Her journal shows her record of every phone call with her family, what day and what time they called. She always saw a blue sky with a wisp of a cloud, even on cloudy, rainy days in Portland. She peacefully passed away at 96 years old, with her family beside her, in Beaverton, Oregon. She was preceded in death by her husband, Robert Conroy and her eldest daughter, Marlene. She is survived by 6 children, Shaun Conroy of Robbinsville, NC, Diane Conroy of Genesee, ID, Sharon Hlavka of Orting, WA, Brian Conroy of Tigard, OR, Jim Conroy of Portland, OR , Dan Conroy of Hillsboro, OR, one sister, Bernice Bartel of Ridgefield, WA and many grandchildren, nieces, nephews and one great grandchild. Service will be at St. Anthony's Catholic Church in Tigard, Oregon on Saturday 2/17 at 11:00 AM

Kathleen Conroy was born in Lewiston, Idaho in 1921, the second of three daughters. She spent her younger days there before her family moved to Portland. As a child, Kathleen spent summers in Seaside and later returned every year with her children.... View Obituary & Service Information

The family of Kathleen Conroy created this Life Tributes page to make it easy to share your memories.

Kathleen Conroy was born in Lewiston, Idaho in 1921, the second...