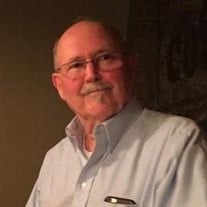 Larry Duane Rush May 31, 1939 - January 6, 2017 Larry Rush died unexpectedly in his home in Woodburn, Oregon. He was born in Winterset, Iowa to parents Carl and Lillian Rush. (Larry liked to inform others that Winterset was the birthplace hometown of actor John Wayne as well as the film set for the movie “Bridges of Madison County”.) The Rush Family relocated to Roseburg, Oregon in 1951 when Larry was just 12 years old. Larry had enjoyed keeping in touch over the years with many of his friends from his Roseburg High School days. Shortly after graduating from high school, Larry enlisted in the US Navy. He served as a Radioman from 1958-1962. He traveled many places during his service, including European destinations. He fondly recalled many humorous adventures and silly escapades. After his service he returned to Roseburg and was married. He relocated his young family to San Jose, California and raised three children. While living in California, Larry worked for IBM. He retired from IBM after a 25 year career. Soon after retirement Larry moved to the Pacific Northwest. There he reconnected with his longtime crush Rita Pierson. Larry and Rita were married on June 26, 1993. They enjoyed many travels together both domestic and abroad. Larry especially loved fine red wine and BBQ ribs. His hobbies included winery tours, anything IT, woodworking, and solving crossword puzzles. He also enjoyed watching NASCAR, Westerns and the TV show “How It’s Made”. We will all miss his mischievous smile and sense of humor. Larry is survived by his wife of 23 years Rita Rush, brother Carl Rush, his daughter Angela Zechenelly and husband Bruce, daughter Annette Rush and husband Patrick Bentz, son Matthew Rush and wife Andrea, stepdaughter Lisa Case and husband David, stepson Kent Sessions and wife Manon. Larry’s grandchildren include Kevin and Eric Zechenelly, Nathan Bentz and Taylor Rush. Larry will also be missed by his little shadow, Sienna the Labradoodle. His family will hold a private celebration of his life at a later date. Please see: http://www.cornwellcolonial.com/obituaries/Larry-Rush-3/ In lieu of flowers, donations can be made to the Arthritis Foundation. http://www.arthritis.org/donate.php "Larry D. Rush's obituary will be in the Roseburg - News-Review paper this Sunday, January 22, 2017."

Larry Duane Rush May 31, 1939 - January 6, 2017 Larry Rush died unexpectedly in his home in Woodburn, Oregon. He was born in Winterset, Iowa to parents Carl and Lillian Rush. (Larry liked to inform others that Winterset was the birthplace... View Obituary & Service Information

The family of Larry Duane Rush created this Life Tributes page to make it easy to share your memories.