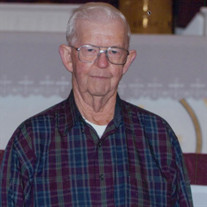 With the death of Leonard R. Ferschweiler, the earth has lost 100 years of wisdom and kindness. Leonard died on January 30th at his farm that he shared for over 76 years with his wife Patricia Ann (Davidson) Ferschweiler. Pat passed away in September of 2016. Leonard was born in St. Louis, Oregon on October 23, 1917, to Joseph P. and Mary Ellen (Hayes) Ferschweiler. He was preceded in death by all his siblings - Bernard, Leo, Helen (Smith) and Angela (Conner). Leonard spent his early years living between St. Louis and Portland, Oregon. While in Portland, Leonard attended St. Phillip Neri School until 3rd grade where he received his First Communion. The family then moved to St. Louis full time where he attended St. Louis School. While at that school, there was a teacher who was sure he could change Leonard from a left-handed to a right-handed writer. Needless to say that plan didn’t stick. After 8th grade Leonard worked in the area, giving his Dad his paycheck at the end of the week to help with family expenses. He met his future wife, Pat, while working on her Dad’s farm. Farming was his future and he bought his first piece of property while a “bachelor”, in February, 1940 for $8100.00. Leonard and Pat married on October 12, 1940. On his farm Leonard raised vegetables (corn, beans, brussel sprouts, cauliflower), hops and grain. He also raised Leghorn chickens for their eggs, providing a steady income for the family. At times there were 10,000 chickens on the farm. This meant the eggs were gathered twice and cleaned once daily. With the chickens, cows, pigs and sheep, there were was very little time off. A two day trip to the beach would be the family yearly vacation. Leonard and Pat retired in 1972 and then the traveling began. They visited: Ireland, Canada, Texas, Washington DC, Kansas City, Branson, Las Vegas and Reno. There was also the weekly trip to the casino in Lincoln City on Wednesday mornings, after they had prayed their hour at the Sacred Heart Chapel. During retirement, they also helped their children with 'chores'. Building a house, moving a household, driving a tractor, they were up for any adventure. They raised 5 children on the farm - Gene (Barbara), Rick (Dianne), Larry (Debbie), Sue (Gale) Mills and Ann. There are 13 Grandchildren, 28 Great-Grandchildren and 1 Great-Great-Grandchild. When asked what he would pass onto the next generation his response was; integrity, honesty and being respectful. A viewing will be held Monday, February 5th, from 10am - 4pm at Simon - Cornwell Funeral Chapel in Woodburn. Services will be Tuesday, February 6th at Sacred Heart Catholic Church in Gervais, Oregon, with the Viewing at 9:30am, Rosary at 10:00am and Funeral Mass at 11am. Following the Mass, Burial will be at St. Louis Cemetery. Following the Burial, a Reception will be held at the St. Louis Hall. Donations may be made to Mt. Angel Abbey or Sacred Heart School in Gervais, Oregon.

With the death of Leonard R. Ferschweiler, the earth has lost 100 years of wisdom and kindness. Leonard died on January 30th at his farm that he shared for over 76 years with his wife Patricia Ann (Davidson) Ferschweiler. Pat passed away in... View Obituary & Service Information

The family of Leonard Raphael Ferschweiler created this Life Tributes page to make it easy to share your memories.

With the death of Leonard R. Ferschweiler, the earth has lost...