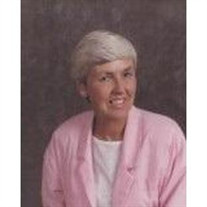 Lois Ellen Houston Humphrey passed peacefully at home in Wilsonville, Oregon on April 14, 2016 at the age of 83. She was faithfully cared for at home by her husband of 63 years, Thomas Humphrey. Lois was a descendent of 1848 Oregon pioneers Robert and Mary Houston who left Ohio and settled in Albany, Linn Co. taking up Oregon Donation Land Claims. She was born on August 21,1932 in Coos Bay, Oregon. Her parents were James Houston and Lillette Carlson Lanway. She is survived by her husband Thomas Humphrey, three daughters, Denise Weinke and husband Don, Ellen Carvalho and husband Neill, Megan McManus and husband Craig and preceded by fourth daughter, Jane Robins. She has two sisters: Helen Blenz, Carol Kost and was preceded in death by brother Frank Houston. Additionally, this includes six grandchildren: Jennifer Robins, Andrew Robins and Collin, Braden, and Ashlyn McManus and three great grandchildren. All of whom fondly called her “Granny”. She graduated from Marshfield High School and completed a B.S and a Master’s Degree in Library Science from University of Oregon. Her career positions included Librarian at Marshfield High School and Coquille High School. For many years she was a substitute teacher so that she could stay at home and devote time to her children. Lois belonged to numerous organizations some of which included: PEO Chapters AS and FR, Daughters of the American Revolution, Coos Sand ‘n Sea Quilters, South Coast Runners Club, Life Member of the Coos Bay Historical Society, Friends of the Wilsonville Library, The Friends of the Coos Bay Library and Sons and Daughters of the Oregon Pioneers. Lois was very active in many other community organizations. She was a member of Saint Francis of Assisi Episcopal Church in Wilsonville and for most of her life, Emmanuel Episcopal Church in Coos Bay, Oregon. Her honors included University of Oregon Honor Roll and Pi Lambda Theta Educational Honorary. She is also listed in Who’s Who in America, The West and American Education. She was extremely pleased to win the Bunker Hill Elementary Scholarship Cup in the eighth grade. Lois had many hobbies which included traveling, volkswalking, hiking, camping, backpacking, reading, quilting, genealogy and theatre. She was enormously proud of finishing 23 Pre Memorial Runs (including the first), three Portland Marathons, over 1100 volkswalks in all the counties of Oregon and throughout the United States. She was a voracious traveler and visited over 75 countries. Her passports were completely filled! Her favorite things were playing games with her grandchildren, enjoying a bowl of popcorn, cruises, Black Butte vacations, camping and traveling with her family. She was known to never lose a game of Chinese Checkers. A memorial service will be held at St. Francis of Assisi Church ,8818 NE Miley Road, Wilsonville at 2:00 pm on May 14th, 2016. Father Tony Petrotta will preside. Memorial contributions can be made to: Coos Bay Public Library, 525 Anderson Ave, Coos Bay, Or, 97420 Wilsonville Public Library, 8200 SW Wilsonville Road, Wilsonville, Or, 97070 Emmanuel Episcopal Church, 400 Highland Ave. PO box 1028, Coos Bay, Or,97420 St. Francis Episcopal Church, 8818 NE Miley Road, Wilsonville, or 97070 PEO Oregon State Scholarship and Cottey College

Lois Ellen Houston Humphrey passed peacefully at home in Wilsonville, Oregon on April 14, 2016 at the age of 83. She was faithfully cared for at home by her husband of 63 years, Thomas Humphrey. Lois was a descendent of 1848 Oregon pioneers... View Obituary & Service Information

The family of Lois Ellen Humphrey created this Life Tributes page to make it easy to share your memories.