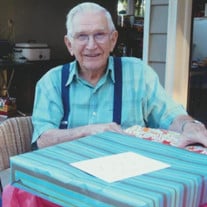 Louis “Louie” Francis Doubrava was born July 27, 1924, in Hubbard, Oregon, and passed away June 7, 2022, in Woodburn, Oregon. Louie was the seventh of nine children born to John P. and Magdalena (Nemec) Doubrava. After 8th grade, he helped his family on the farm. In 1954, he married Armella Edler, and they made their home in Hubbard on the farm where they raised six children. In addition to farming, Louie worked as a part-time mail carrier. Upon retirement, Louie and Armella moved to Senior Estates in Woodburn in 2000. Louie was a life-long member of St. Luke Catholic Church and was active with St. Vincent de Paul most of his life. Louie was preceded in death by his wife of 65 years, Armella, in 2020. Also preceding him in death were his parents, John and Magdalena, and his siblings, John, Anne, Mary, Wence, Ben, Cyril, and Leni. Survivors include his children, Emily (Clarence) Splonski, Ray (Alleen), Dave, Ed (Kris), Ken (Shari), and Theresa (Walt) Markee. He is also survived by his sister, Albina Pirkl; 13 grandchildren; seven great-grandchildren; and many nieces and nephews. The viewing will be at St. Luke Catholic Church in Woodburn on Friday, June 17, at 10:00 a.m. Rosary will be held at 10:30 a.m. followed by mass. Interment will be at St. Like Cemetery. Arrangements were made by Simon Cornwell Colonial Chapel.

The family of Louis “Louie” Francis Doubrava created this Life Tributes page to make it easy to share your memories.