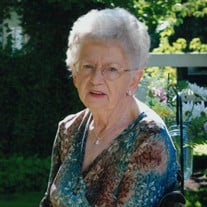 Margaret A. Krupicka Born into this life on Dec. 18, 1929 at St. Paul, Oregon and passed away on August 23, 2018 at Woodburn, Oregon. Margaret grew up in St. Paul where her father farmed the family homestead at San Salvador near St. Paul with his brothers. She attended elementary school at St. Paul Academy, and graduated from St. Paul High School in 1948. She is the Great Granddaughter of Dr. John Brentano who immigrated from Gronningen, Kingdom of the Netherlands and settled his family in St. Paul in 1863. He practiced general medicine and delivered most of the babies born in the St. Paul area between 1863 and 1900. She married Martin J. Krupicka Jr. on Nov. 18, 1950 and they lived in Woodburn, OR for their entire married life. They were blessed with 9 children, 23 Grandchildren, and 26 Great Grandchildren. Margaret's artistic talents were instrumental in her role as one of the founders of the Woodburn Art League in 1966. Her oil and watercolor paintings are lovingly displayed in many of her family and extended families homes. She was also an active member of St. Luke's Catholic Church Altar Society until Parkinson's Disease left her physically unable to continue painting and participating at church. She is survived by her husband Martin J. Krupicka, children Darryl Krupicka of Canby, OR, Steven Krupicka of Canby, OR, Carolyn Bowers of Dallas, OR, Diana Wells of Woodburn, OR, Jenine Mathies of Cloverdale, OR, Tom Krupicka of Tillamook, OR, JoAnn Schaffner of Woodburn, OR and Ted Krupicka of Newberg, OR, her brother Duane Brentano of Woodburn, OR and her sister Louise Augustus of Woodburn, OR. She is preceeded in death by a beloved daughter Kathleen, her parents Bernard & Marie Brentano, brother Richard Brentano and sister Bernita Buchheit. Services will be held Wednesday August 29, 2018 In lieu of flowers, donations may be made to the Woodburn Art Center. Great Grand Children Joe 5 Jeanie 3 Jed 4 Katie 2 Hayley 2 Samantha 3 Melissa 2 Renae 1 Ryan 1 Dylan 1 Ben 1 Justin Due in 2019

Margaret A. Krupicka Born into this life on Dec. 18, 1929 at St. Paul, Oregon and passed away on August 23, 2018 at Woodburn, Oregon. Margaret grew up in St. Paul where her father farmed the family homestead at San Salvador near St. Paul... View Obituary & Service Information

The family of Margaret Agnes Krupicka created this Life Tributes page to make it easy to share your memories.