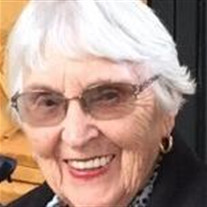 Marguerite Marcelle Gragert ‘Guiguite’ as she was known growing up, was born on August 1, 1924, in Sorens, Fribourg Switzerland to parents Léon and Marie Ayer. She completed her compulsory education in Romont, Switzerland after which she worked in Soleure, Switzerland to complete her mastery of German. It was during this time, she met a handsome young American soldier, Richard Niquette, while on R & R in Lugano, Switzerland. The two soon married in Livorno, Italy, where Richard was stationed during WWII. Maggie arrived at Ellis Island in October of 1946 along with many others who saw America as the bright light in their future. Richard purchased an Army jeep from the base and together they began their trek across the US in this open jeep in the middle of October, landing in Wimer, Oregon where her new in-laws had a small farm. She soon became known as ‘Maggie”. She spoke little to no English nor did Richard speak French. Two daughters arrived within 11 months of each other and Maggie's mother, Marie, traveled from Switzerland to live with the family for several years while helping with the girls. Farming did not turn out to be a lucrative adventure in the late 40’s so Richard returned to his trade as a butcher and in 1952 they purchased a grocery store in the larger town of Rogue River, Oregon, where Maggie worked by his side. In these early years, it took 10 years to obtain US citizenship and Maggie could not return to her home country during those 10 years. In 1958, as a US citizen, she traveled back to Switzerland taking her two daughters for a long overdue visit. Richard and Maggie later divorced in 1967. ‘Maggie’ married Wilbur Gragert in June of 1972, moving from Central Point, Oregon, where she worked for United Grocers, to their home in Beaverton, Oregon. They owned a beach house at Rockaway where they enjoyed fishing and crabbing at the nearby Marina. In 1979 they purchased a business in Madras, Oregon operating it until they retired to a home above Lake Billy Chinook in Culver, Oregon in 1982. This also became a gathering place for the kids and grandkids to enjoy summers boating and fishing. They soon became snowbirds, to Apache Junction, Arizona, and spent 30 years traveling between both deserts, taking trips to Mexico, Canada, Europe, & the Grand Canyon. Maggie loved the outdoors from the Swiss Alps to the warm dry climates of the desert. Maggie celebrated her 75th birthday with a large Swiss & American family reunion in Switzerland. She enjoyed many years of traveling, boating, fishing, tennis, hiking, and welcoming family and friends from near and far. Maggie and Will moved to Woodburn Estates in 2004, after a few more winters in Arizona. The Oregon winters were an adjustment but Maggie soon became engaged in swimming, bingo, her church and other community events. She loved to garden and enjoyed filling her yard with color and her favorite flowers. Marguerite Marcelle Gragert (Ayer), age 93, died on December 31, 2017, at home in Woodburn, Oregon. Marguerite is survived by her husband Wilbur Gragert Sister~ Odette Burkhardt of Rolle, Switzerland Daughter: Danielle Slaughter & husband Larry of St. Paul, Oregon Grandchildren~ Scott Slaughter & (Tina; Brett Slaughter & wife Karen Daughter: Renée Niquette of Wilsonville, Oregon Grandchildren~ Tavis Gillespie, Geoffrey Gillespie, & Ingrid Gillespie Stepson: Jim Gragert & wife Meleen of Lake Oswego, Oregon Grandchildren~ Dirk Gragert, Shawn Richey, & Kelley Johnson Stepson: Scott Gragert & wife Ann of Silverton, Oregon Grandchildren~ Brian Gragert, Jenne Gragert, Lara Cobb, & Andy Gragert Maggie is preceded in death by her brothers, André and Rogér Ayer of Genève, Switzerland. Remembrance Service Hoodview Church of God Woodburn OR January 25th 2018 The family would like to thank all who prayed with us, came to sit by her side, sent cards, flowers, and called during her last days.

Marguerite Marcelle Gragert &#8216;Guiguite&#8217; as she was known growing up, was born on August 1, 1924, in Sorens, Fribourg Switzerland to parents Léon and Marie Ayer. She completed her compulsory education in Romont, Switzerland after... View Obituary & Service Information

The family of Marguerite Marcelle Gragert created this Life Tributes page to make it easy to share your memories.

Marguerite Marcelle Gragert ‘Guiguite’ as she was known growing...