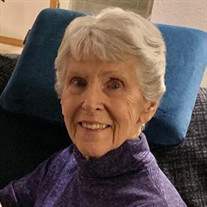 June 27, 1930 – March 4, 2022, she was three months shy of her 92nd birthday! A family memorial is planned at the residence of Erin & Peter Russell in Sherwood, Oregon. Mrs. Michael was born in Detroit, Michigan to Marjorie and John Christie. Midge graduated from Glendale High School and later attended Glendale College, in Glendale, California. She married Robert Clay Michael on June 2, 1951 and later moved to Sierra Madre, California where she volunteered with The Pasadena Girl Scouts, Arcadia Children’s Guild, and she served as Chairman of the local Cancer drive. Midge and her family moved to Atlanta, Georgia in 1969 where she worked in Real Estate and was co-owner of two businesses. In 1988 Midge and her husband Bob retired to Bend, Oregon where she was active in the First United Methodist Church and volunteered at the High Desert Museum, the Deschutes Historical Museum, and with Interfaith Volunteers. Midge was also a member of the Genealogical Society. In addition to her passion for service, Mrs. Michael enjoyed books, tracing family genealogy, gardening, trips to the beach with her daughters, and walking in nature. Midge’s greatest joy was sharing time with family and dear friends. She was preceded in death by her husband Bob in 1997. Midge is survived by four daughters; Christie Dimon of Pendleton, Oregon, Heidi Hartman of Sierra Madre, California, Erin Russell of Sherwood, Oregon, Marjorie (Meg) Goehle of Olympia, Washington and by one sister; Patricia Lindley of Ventura, California. Midge was also blessed with 11 grandchildren and 13 great-grandchildren! Midge’s family requests that memorial contributions be directed to Habitat for Humanity in Bend, Oregon, and to Tenderly Hospice, LLC in Portland, Oregon.

June 27, 1930 &#8211; March 4, 2022, she was three months shy of her 92nd birthday! A family memorial is planned at the residence of Erin & Peter Russell in Sherwood, Oregon. Mrs. Michael was born in Detroit, Michigan to Marjorie and John... View Obituary & Service Information

The family of Marjorie (Midge) Christie Michael created this Life Tributes page to make it easy to share your memories.