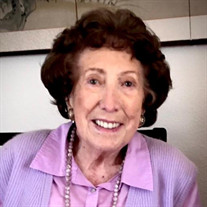 Obituary Mary “Betty” Darnall Funeral: St. Francis of Assisi Parish, Sherwood, Oregon Thursday July 1, 2021 2:00 p.m. Optional Rosary at 1:30 Betty Darnall died peacefully at Emanuel Hospital in Portland, Oregon on June 26, 2021 in the company of her three daughters and granddaughter. She had developed sepsis but defied doctors’ expectations yet again by surviving six days in the ICU. She was able to say good-bye to her family and tell them she loved them one more time. Betty had a happy childhood in the village of Moss Bank, Lancashire, England until age 9 when World War II changed everything. Briefly evacuated to Blackpool, she was happier when returned to her family “in spite of the air raids and bombings.” When the war closed schools, she like many others worked for the war effort at the ICI Chemical factory, leaving when she could for a job at the Baby Linen Factory where she learned to sew. After the war ended, she worked at the Isle of Man for a summer adventure, then Butlin’s Holiday Camp and a shirt factory during winters. Betty found her destiny when that factory couldn’t rehire her. She took a job in the PX at Burtonwood, the U.S. Air Force base. There she met her future husband, Lavern Darnall, who was stationed in England during the Korean conflict. They married in 1954, and she emigrated to the states 18 months later with their 9-month-old baby daughter. After Betty suffered a rough bout of homesickness in Montana, the couple relocated to Portland, Oregon where they raised three girls. Other English women from the Transatlantic Bride and Parents Association and the Daughters of the British Empire helped her feel settled in her new home. Those formative wartime memories remained very present throughout her life. When her daughters left for school in the mornings, she asked if they had their lunches, their homework, and, with a big laugh, their gasmasks! After her children were grown, Betty enjoyed working part-time in sales. She loved dancing, sewing, planting flowers, and the Catholic Church, to which she was as devoted as she was to her family who were everything to her. She is survived by her husband, Lavern Darnall, and three daughters, Gail Doyle, Faye Darnall, and Pam Yee (Don Yee), one granddaughter, Julie Sample, three great-grandchildren, and two great-great-granddaughters. May she rest in peace, beloved mother and wife. In lieu of flowers, the family requests donations to the following organizations in the name of Mary E. Darnall The National Sanctuary of Our Sorrowful Mother, the Grotto 8840 NE Skidmore St. Portland, OR 97220 You can use the online donation system (search The Grotto), but you wouldn’t be able to designate a donation in memory of Mary Darnall. Catholic Charities 2740 SE Powell Blvd Portland, OR 97202 US You can honor Betty Darnall by indicating her name in the “Honoree” section in the website. https://www.classy.org/give/138659/#!/donation/checkout

The family of Mary "Betty" Darnall created this Life Tributes page to make it easy to share your memories.