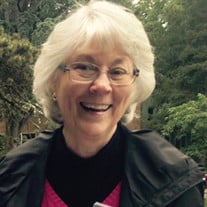 Mary Ann Clark Hurst, 73 Mary Ann Clark Hurst, 73, was called home to God on August 29, 2019 after a 2-1/2 year battle with cutaneous T-cell lymphoma, a rare form of cancer. Her final days were spent in her hometown of Portland, Oregon where she was surrounded by her family and friends. Mary Ann touched so many people throughout her life’s journey making lifelong friendships and new friendships along the way. She was a kind and generous person who loved spending time with her family and friends. Mary Ann was a person of faith and was an active member of the Episcopal Parish of St John the Baptist in Portland, Oregon. She was happiest when she was helping and caring for others. Over the time of her battle with cancer she was the image of patience and grace and will be dearly missed by so many but never forgotten. Mary Ann was born on September 19, 1945 in Delta, Colorado to Rose and Arthur Clark. Her family later moved to Coos Bay, Oregon where she attended Marshfield High School. In January of 1965, Mary Ann married Nelson Currier and they later moved to Waddington, New York where they were blessed with two daughters. Several years later they returned to Oregon. On February 14, 1985, Mary Ann married her high school sweetheart, Mark Hurst, in Eugene, Oregon. She worked many years for the Eugene School District and retired in 2007 as the registrar at Winston Churchill High School. After retirement she moved to Portland, Oregon to be closer to her family. Mary Ann is survived by her daughters, Katie Currier and Stacey Currier; her grandchildren, Kassandra Rusco, Alexander McCormick and Andrew Crino; her sisters, Peggy Pohrman and Sue Giles; and numerous nieces and nephews. Mary Ann was preceded in death by her spouses, Nelson Currier and Mark Hurst; her parents, Arthur Clark and Rose Clark; her grandparents, Frank Jandera, Frances Jandera, Howard Clark and Mary Roxey Clark; and her nephew, Travis Pohrman. A memorial service will be held at St John the Baptist Episcopal Church in Portland, Oregon on Saturday, September 21, 2019 at 11:00 AM. She will be laid to rest with her late husband Mark Hurst at Willamette National Cemetery (Happy Valley, Oregon) in a private interment. “If tears could build a stairway and memories a lane, I'd walk right up to Heaven and bring you home again.”

The family of Mary Ann Hurst created this Life Tributes page to make it easy to share your memories.