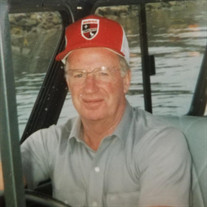 Merle Eugene Kirk was born February 6, 1934 to Urban James and Zeta Genevieve Kirk in St. Paul, Oregon. He was number eight of ten children and the last to be born at the family home that his father built. Merle passed away March 18, 2021 at the age of 87. After graduating from Columbia Prep, a Catholic boarding school in Portland, Oregon. He was called to duty in the United States Army and served in the Korean war. After returning home from serving his country, he went to work with his brother John Kirk running Twin Oaks Poultry in St. Paul. Soon after, he met the love of his life, Lorene and after a short courtship they were married on February 9, 1957. A couple of years later they moved to California with two small children, Diane and Philip. Merle went to work driving truck for Coca Cola. They lived in California for 2 years during which time their third child Roger was born. While on a business trip, Tom Dybvad, owner of what was known at the time Willamette Valley Egg Farms, sought out Merle to offer him a job selling eggs back in Oregon. On their move to Oregon, Merle ran his route for Coca Cola on Friday, packed up his family, stopped in Paisley, filled his deer tag and delivered eggs in Portland on Monday. He liked to get the most out of his time. Two years after returning to Oregon, their fourth child Gene was born and three years later the last of the five children, Karen was born. Merle spent the next 34 years at Willamette Egg Farms starting out as a route driver and retiring as part owner and president of the company. Things that Merle enjoyed most was spending time with his wife and family. Merle had many passions in life including carrying on the tradition of a family deer hunting trip to Paisley, Oregon, that his father U.J. Kirk started in the early 1930’s, which is also a shared tradition by his nephew Michael Bernard. Merle’s nephew Gary Kirsch is responsible for his second passion of elk hunting in north eastern Oregon. Merle and Lorene spent their retirement years wintering in Yuma, Arizona relaxing in the sun, playing golf and was always fascinated by the science of the local agricultural community. He enjoyed taking his jet boat to the Snake River in Hells Canyon, spending time on the Oregon coast at his beach cabin, fishing, story-telling and last but not least watching Jeopardy with a nice glass of wine. Merle is survived by his wife of 64 years, Lorene Kirk; his daughter Diane Douglass and her husband John; son Phil and his wife Reta; son Roger and wife Judy; son Gene and wife Sofia; daughter Karen Brown and husband Greg. Merle was blessed to have eight grandchildren, four step-grandchildren, and 3 great grandchildren. Merle loved all of his brothers and sisters, nieces and nephews. The family would like to thank everyone for all of their thoughts and prayers.

Merle Eugene Kirk was born February 6, 1934 to Urban James and Zeta Genevieve Kirk in St. Paul, Oregon. He was number eight of ten children and the last to be born at the family home that his father built. Merle passed away March 18, 2021... View Obituary & Service Information

The family of Merle Eugene Kirk created this Life Tributes page to make it easy to share your memories.