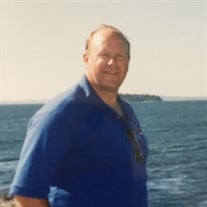 Michael C. Ramsby (Mike) was born in Portland to Robert Ramsby and Ruth (Brown) Ramsby on June 26, 1947. He passed away peacefully at home, 18 years after retiring and being diagnosed with Parkinsons Disease. Mike is survived by his wife Julie Jackson; son Scott (Helen, and grandson Ender); daughter Dianne (Mike); and stepchildren Bill (Terra, granddaughter Christine) Jackson, Ben Bolen, Brooke Jackson (Nate Winegardner, granddaughter Kylea) . Over the last five years, Mike sought out and reunited with many old friends. Those included childhood friends from Wilson High; fraternity brothers from Oregon State University, and Oregon State Police colleagues. The continuing contact and support from friends over his last several months was heartwarming. Mike was a Navy veteran, an air traffic controller in Key West and on the USS Independence. His career in OSP began in Coos Bay, where he moved from patrol to investigations. The District Attorney and FBI awarded Mike commendations for his work. With a promotion to Sergeant, the Ramsby family (Mike, Virginia, Scott, and Dianne) moved to Salem in 1988. Mike worked in Lottery Security, and later at OSP headquarters. He managed a variety of units and was the Interpol contact for Oregon. A lover of Oregon's beautiful outdoors, Mike enjoyed the coast, valley, forests, and desert. He was a scuba diver in high school and later. He was a sailor, and a member of the Coos Bay Yacht Club. In 2012 Mike and Julie found their perfect home on two acres east of Woodburn with a view across fields to the Cascades. In lieu of flowers, please donate to your favorite charity. (Suggestions: Mike enjoyed Oregon Public Broadcasting, and was helped by Parkinsons Resources of Oregon.) Celebration of Life will be held Sunday, September 11, 11:00, at Wooden Shoe Farms. Mike would want this to be a festive occasion, so please wear colors, Hawaiian shirts, tie-dye, or the like.

Michael C. Ramsby (Mike) was born in Portland to Robert Ramsby and Ruth (Brown) Ramsby on June 26, 1947. He passed away peacefully at home, 18 years after retiring and being diagnosed with Parkinsons Disease. Mike is survived by his wife Julie... View Obituary & Service Information

The family of Michael Charles Ramsby created this Life Tributes page to make it easy to share your memories.