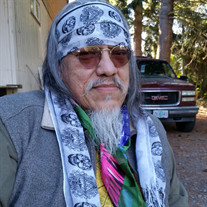 On March 7, 2018 at 6:12 p.m. we lost a warrior. Miguel Loredo Reyes passed on to his new journey in the Spirit World. Miguel was the eldest of six children born to Ramon Loredo Reyes and Cynthia Marie Segoviano Reyes. He is preceeded in death by his daughter Jovita Chappelle, father Ramon, mother Cynthia and brother Antonio. Miguel leaves behind his wife of 38 years Cassandra, son Ramon Blaine, daughter-in-law Keyonna Alvarez, granddaughters Luna and Jovita Sweetgrass, adopted grandson Mowgli, adopted daughter Nikki Shelton, son-in-law Matt Shelton and grandsons Caleb Shelton, Jaryd Wilber, granddaughters Ra'el Wilber, and Katelyn Wilber,sisters Jovita Pena, Teresa Keeney, Marina Guzman and Ramona Reyes, many nieces, nephews and cousins. He also leaves behind many friends who he called family. Miguel graduated from Klamath Union High School in 1974. He continued his education at OIT in Klamath Falls and Eastern Oregon State College where he studied Community Services and Philosophy. He enjoyed being a DJ at both campuses. He moved to Portland in 1978 to complete his bachelors. While there he worked as an Intern at the Department of Veterans Affairs. Miguel graduated with a Bachelors Degree in Public Administration from Portland State University in 1979. His degree led him to Chemawa Indian High School in 1982 where he was a Home Living Specialist. He then went back to Portland State University in 1986 for a year to complete graduate school for Public Administration. While there he worked as an intern for US Public Health Service, Indian Health Service, Portland Area Office. In the Fall of 1987 Miguel went back to Chemawa where he was a Business Manager for several years and then took the position of Supervisory Home Living Specialist. After leaving Chemawa Miguel worked at Walmart and then the State of Oregon Department of Human Resources as a Child Welfare Caseworker. Miguel was very active in the community. He along with several other fathers started the French Prairie Wrestling Club in Gervais, he was active at Pennisula Wrestling Club in Portland, Dornbecher's Children's Hospital fundraising campaigns and Parents of Children with Cancer Support Group, Gervais School Board Budget Committee, and Salem Mosaic Committee. Miguel enjoyed writing and preforming the Spoken Word. He along with our son Ramon started a group called the St. Louis Posse that preformed many places in the Willamette Valley. He also would join in on Open Mics with many of his friends from the music world. Everyone that Miguel came into contact with was touched in a special way and became a friend forever. He always left a lasting impression. He loved his El Jardin The Garden, his John Deere "Harley" Tractor, he loved working with wood and had many projects going, yet to be finished. Another strong passion of Miguel was fighting for justice for "The Human Being". He was proud to support Standing Rock, making two trips to take supplies to Camp Oceti Sakowin. He believed strongly in taking care of Mother Earth. Miguel was a husband, a father, a brother, a cousin, an uncle, a grandpa, a father-in-law, a brother-in-law, a friend and He Will Be Missed.

On March 7, 2018 at 6:12 p.m. we lost a warrior. Miguel Loredo Reyes passed on to his new journey in the Spirit World. Miguel was the eldest of six children born to Ramon Loredo Reyes and Cynthia Marie Segoviano Reyes. He is preceeded in... View Obituary & Service Information

The family of Miguel "Mike" Loredo Reyes created this Life Tributes page to make it easy to share your memories.