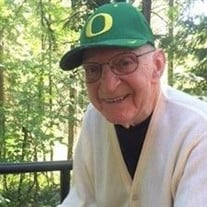 Norman L. Weekly March 15, 1928 – March 10, 2017 All who knew Norm understood he had two great loves: his family and the land of Oregon. Norm was born in Myrtle Point, Oregon, to Rosettaand Edwin Weekly. After his parents divorced,he lived mostly with his father, an itinerant logger, and his dad’s sisters. He finished high school in Lebanon, entered the University of Oregon in 1945, and became a member of Beta Theta Pi fraternity. He remained a fervent lifelong Ducks fan. To pay for college, he worked in the woods of southwest Oregon. Drafted in 1950, he served for two years as a radio operator with the U.S. Army in Germany during the Allied Occupation. After a year of law school, he worked for Allstate and Standard Insurance, before his career-capping,thirty-plus years with Farmers Insurance Group – first as an agent in Eugene, then as a long-serving District Manager in the Portland area. None of his success could have happened had he not met the love of his life, Arlene Maher, at a dance at the Eugene Hotel. They were married on September 13, 1958, at St. Mary’s Episcopal Church in Eugene. Norm and Arlene were blessed with three children, and four grandchildren: son Chris; daughter Katie (and Jeff) Jones, and their children Trent and Anna; and son Brad (and Betsy), and their children Keelin and Jack. Norm loved the outdoors: hiking, fishing, golf and skiing. He enjoyedplaying music, fromalto sax in dance bands during his high school years to clarinet in the Canby Orchestra during his retirement. He passed these passions onto his children and grandchildren, together with his love of family and community. With an eye toward retirement, Norm and Arlene moved to Charbonneau in 1993. They became active members of St. Francis of Assisi Episcopal Church, a faith community which became a very important part of their lives. In 2014, with Norm’s dementia worsening, he and Arlene moved into nearby Springridge where Norm eventually lived in its memory care unit. Arlene and the family are tremendously grateful for the loving care he received there, which carried him to his final day. After a fall on March 5, Norm’s health declined. In the fading light of a Spring afternoon, with all his immediate family surrounding him, he gently exhaled his final breath and entered the arms of the God who first gave him life. Norm’s Memorial Service will be held at St. Francis of Assisi Episcopal Church in Wilsonville on Saturday, April 29th at 11:00 am. A reception follows, with private interment in the parish’s Memorial Gardens. In lieu of flowers, the family suggests a gift to the Alzheimer’s Association Oregon Chapter or to St. Francis of Assisi Episcopal Church for care of the Memorial Gardens. Saturday, April 29, at 11:00 am St. Francis of Assisi Episcopal Church, Wilsonville Memorial Service and Reception, followed by private placement of his remains in the parish Memorial Gardens.

Norman L. Weekly March 15, 1928 &#8211; March 10, 2017 All who knew Norm understood he had two great loves: his family and the land of Oregon. Norm was born in Myrtle Point, Oregon, to Rosettaand Edwin Weekly. After his parents divorced,he... View Obituary & Service Information

The family of Norman Lee Weekly created this Life Tributes page to make it easy to share your memories.