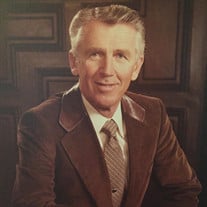 Orrin Ostrom - Obituary Orrin Ostrom, 93, passed away peacefully of natural causes on September 20, 2016 at French Prairie Care Center in Woodburn, Oregon. Orrin was born on a family homestead near Douglas, North Dakota on November 8, 1922. He was the 7th of 8 children born to Oscar and Anna Ostrom. In 1938 the family moved west and bought a farm in Woodburn to be near many family members who had settled in the growing Norwegian community. In 1943 Orrin enlisted in the United States Navy and proudly served during World War II on Kwajalein Atoll in the Marshall Islands. He was part of the Casu F-20 unit that participated in the invasion of Roi-Namur, which became a refueling stop for allied forces in the Pacific Theater. After rejoining the family in the Woodburn area, Orrin became a home builder, Union Oil gas station operator and partner at Sauvain Motor car dealership. Upon retiring from the car business, he never stopped working and spent the next 20 years with Withers Lumber. Orrin was named First Citizen of Woodburn in 1980, was a member of the local Jaycees, American Legion, VFW, Knights of Columbus, and St. Luke Catholic Church. Orrin was a charismatic man who lived to make everyone happy. He loved people and had that special gift of making you feel you were special to him……and you were. Preceding him in death were his parents; brothers Clifford, Tom and Arvid; sisters Julia Langford, Verna Heer, Mabel Heer; and daughter-in-law, Chris Hykal. He is survived by his loving wife of 48 years, Kerin Ostrom; sons Rick (Patty) of Salem, Greg (Barb) of Salem, Steve of Bothell, WA, Mark (Tracy) of Bend, daughter Kris of Amherst, OH, and brother Clinton (MaryJane) of Phoenix, AZ; as well as 11 grandchildren and 10 great grandchildren. Funeral services will be held at 11:00 am on Monday, September 26th at St. Luke Catholic Church in Woodburn, followed immediately by a graveside service at Belle Passi Cemetary. The family requests that in lieu of flowers a donation be made to the Alzheimer’s Association. Funeral arrangements by Simon-Cornwell Mortuary.

The family of Orrin Ostrom created this Life Tributes page to make it easy to share your memories.