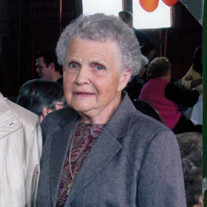 Patricia (Pat) Ann Ferschweiler passed away on September 15 in Woodburn, Oregon. Pat was born to Edward and Eleanor Kirk Davidson on March 26, 1920 in St. Paul, Oregon. Pat married Leonard R. Ferschweiler in St. Paul on October 12th, 1940. They have been married one month short of 76 years. Pat attended schools in St. Paul and then after high school went to Marylhurst College for one year and then business school for a year. Pat was very good with numbers and actually skipped a grade in school. Later on, this love of numbers led her to faithfully and accurately keep the books for the St. Louis Altar Society for many years. Pat met Leonard at her parents' farm in St. Paul, Oregon where Leonard had worked for a number of years. Leonard and Pat began their farming lives in St. Louis, Oregon. They bought their original farm of 143 acres from the Land Trust of Oregon for back taxes. They worked together on the farm growing wheat, corn, beans and hops. Additionally, they added raising chickens for eggs. Pat was in charge of cleaning, sorting and packaging thousands of eggs a day. Pat enjoyed cooking and sewing for her 5 children. Her baking specialty was the loganberry pie. One of Pat's greatest passions was raising flowers. She grew two rows of zinnias, marigolds and glads in her garden. She also tended to the many roses along their driveway. She received many of these roses from her Uncle Harold Davidson and are over 70 years old. She and Leonard got to start traveling on their 25th wedding anniversary, when they made their first trip to Reno. After that first trip, there were many return trips. They also went to Ireland, Washington DC, Texas and the roads in between. Pat is survived by her husband, Leonard. Her children, Gene (Barbara) Ferschweiler, Rick (Dianne) Ferschweiler, Larry (Deborah) Ferschweiler, Sue (Gale) Mills, and Ann Ferschweiler. Friend of the family, Marla Vardell. There are also 13 Grandchildren, 28 Great Grandchildren and one Great-Great Grandchild. Survived also her sibilings, Mary Mitzlaff, Richland, Washington, Laura Gooley-Zollner, Mt. Angel, Oregon and Ray (Joann)Davidson, St. Paul, Oregon. Sisters-in-law, Teddy Davidson, Gervais, and Ruth Davidson, Boring, Oregon. Preceded in death by brothers Don, James and Robert Davidson. Viewing will be held at Cornwell Funeral Home in Woodburn on Wednesday, September 21, from Noon to 4 p.m. On Thursday, September 22, Rosary will be said at 10 a.m. and Funeral at 11 a.m. at Sacred Heart Church in Gervais, Oregon. Burial will be at the St. Louis Cemetery and a reception will follow at the St. Louis Hall. Donations may be made to the Mt. Angel Abbey or Sacred Heart School in Gervais, Oregon.

The family of Patricia "Pat" Ann Ferschweiler created this Life Tributes page to make it easy to share your memories.

Patricia (Pat) Ann Ferschweiler passed away on September 15 in...