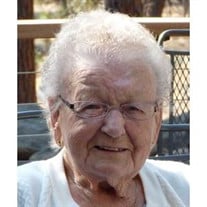 Pauline (Rodgers) Johnson, was born March 26, 1919, in Orchard, Nebraska, and died in Bend, Oregon on December 23, 2015 due to natural causes. She was the fourth child of Frank and Eva Rodgers’ ten children and spent most of her early years on her parents’ and grandfather’s farms. After graduating from 8th grade, she went to live with a couple to care for their disabled mother in exchange for room and board. She moved to Oregon in the late 1930’s with her sister, Leola, working in restaurants. During World War II, she took a two-week course to become a certified welder and began working in the Portland Shipyards for nearly four years (“Rosie the Riveter”). After the war she returned to waitressing. In 1946, Pauline met her husband, Vern C. Johnson, when he returned from Navy service in the Pacific Theater; they married November 1, 1949. Vern C. and Pauline were farmers (primarily berries, cucumbers, broccoli, and cauliflower) in the Woodburn area for approximately forty years and “snowbirded” to various spots in Arizona from 1974 to 1998. They retired, sold their farm, moved into Woodburn in the early 1990s, and celebrated fifty years of marriage prior to Vern C.’s death December 25, 1999. They were long-time members of the Woodburn Immanuel Lutheran Church. Pauline loved roses and at one point had over fifty bushes in her garden. Pauline was preceded in death by her parents Frank and Eva Rodgers; husband, Vern C.; sisters Katherine Hamill, Leola Simonsen, Myrtle Lewis, and Helen Velders; brothers Ray, Morse, Dewayne, and Harold Rodgers; and great-grandson, Tyler Bales. She is survived by her brother, Bobby Rodgers, of Clearwater, NE; her son and his wife, Vern R. and Betsy (Leighty) Johnson of Sisters, OR; her daughter and her husband, Diane (Johnson) and Myrt Horton of Woodburn, OR; six grandchildren and their spouses, Andrea (Bales) and Corey Blackmar, Ben and Wendy (Webb) Bales, Casey and Shanon (Rice) Johnson, Molly (Johnson) and Zach Elwood, Annie (Horton) Spencer, Erin Horton; ten great-grandchildren; and two great-great-grandchildren. Funeral service will be held Mon.- Jan. 4, 2016 at 1:00 PM at Simon-Cornwell Colonial Chapel. Interment at Belle Passi Cemetery-Woodburn.

Pauline (Rodgers) Johnson, was born March 26, 1919, in Orchard, Nebraska, and died in Bend, Oregon on December 23, 2015 due to natural causes. She was the fourth child of Frank and Eva Rodgers&#8217; ten children and spent most of her early... View Obituary & Service Information

The family of Pauline Josephine Johnson created this Life Tributes page to make it easy to share your memories.