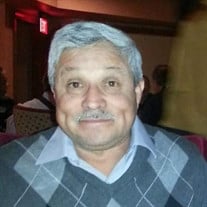 On Sunday January 17, Rafael (Ralf) Avila-Torres, longtime resident of Woodburn after a long battle with Covid-19 passed peacefully in his sleep. Rafael, Ralf or Ralfi to his friends and family was born on August 21, 1957 in La Piedad, Michoacan, Mexico, to Soledad Torres and Pascual Avila. He came to the United States at the age of 17 to work in the fields. At the age of 19 he began working at Silvercrest Manufactured Homes where he continued to work for another 20 years. While working at Silvercrest Ralf learned many different construction skills. How to lay floors, put on roofs, frame walls, install windows, how to install drywall, repair holes in walls, tape and texture and paint. Ralf was a hardworking man who spent his entire life in service to others. Ralf showed his love to others by sharing his skills with them in many big and small ways over the years. He accepted little pay for what he did, preferring to work in trade, he would paint your house, if you would help him fix his roof, that kind of trade. He did this often to the dismay of wife Michelle who needed that money to pay bills, but he would always say “They needed the money more than we did, they are good for it.” He was almost always right. Which was another annoyance. For a few years Ralf branched out into a partnership with co-worker Glenn Fox of Silverton, launching the business of Fox and Avila Custom Drywall, Inc. They travelled across the State of Oregon working in and repairing manufactured homes that had suffered in their travels from the build site to the property where they were to stay. When that business died as many do, Ralf went to work at Spectrum Woodworking in Canby, now of Oregon City where he learned cabinetry and carpentry skills. He never worked just one job though. He was a hardworking man who after working all day, would spend several hours each evening either working on his own house or yard or in someone else’s. It was common for him to be flagged down on his drive home and a neighbor would ask him to patch a hole, or paint their house, or install a ceiling fan. Local businesses, lumber yard and hardware stores often referred jobs to him, because he was willing to do the small stuff that big contractors weren’t. He was much in demand as a handyman around the community. Ralf, although a great handyman, painter, and drywaller, loved building things. In his later years he discovered through his work at Spectrum a talent for building tables and benches. His simple but made with love farm tables and benches, side and coffee tables can be found in the homes of his family and friends, and the shelving and tables he made for his teacher/wife fill her classroom and have and will continue to serve the children of this community for many years to come. He liked to say that he, like Jesus, worked his hands in wood. Ralf was a hardworking man, but the job he most loved and worked at the hardest was being a husband and provider, to his wife Michelle, and the four children and many grandchildren he brought into this world. As hard as he worked he always had time for his family, teaching them the ethics of hard work and a playful life. The children were his greatest accomplishment and biggest fans. Ralf loved all children and young people and always, even on a job, he would make time to talk and laugh and joke with the children in the home. He had his party tricks he would play with them, he would “shake hands” wiggling his hands in the air, or measure their height against his own 5’3” and bang his hand gently into their foreheads proving they were taller than he or his favorite “walking on his hands”. He loved to tell jokes, usually the same ones over and over, but they were always still funny to him. All 4 of his children were born on a Saturday. Ralf liked to brag that he never had to miss a day's work to give birth. In fact he missed very few days work for any kind of illness. Only calling in sick just 2-3 times in over 40 years. That was his work ethic. His love ethic was to hold tight to those he loved and to tell them every day that he loved them. He would always give a hug, a kiss, and a high five, and ask you to do the same when you saw someone he hadn’t seen in a while. Ralf was a man who showed his love through his service to others. He gave so much to his family, neighbors, friends and strangers alike. Service to others was his Love language. I know Ralf is in heaven now, hugging and kissing and high-fiving all of his friends and family members that had passed before him. He is also watching over us, his wife Michelle (Hibdon) Avila of Woodburn, daughter Andrea (Masi) Pena of Philomath and Keizer, daughter Kat (Robbie) Avila, of Woodburn, son Jason Avila of Woodburn, and daughter Kristina (Rosie Avila) Martinez of Woodburn. He also left the many grandchildren he adored, Haley Elwell of Woodburn and Anthony Elwell of Keizer, Dezmond Chavez, Ariahnee and David Martinez and Kyonna Moreno Avila all of Woodburn, and one great-grandson, Abel Gonzalez Elwell of Woodburn. Ralf was much loved by all who knew him and his passing has left a great hole in our hearts and lives. We are comforted by the thought that his love has touched so many in our community and beyond, and that he is now finally able to get the rest he so truly deserves. Thank you for being a part of his life and ours. The family of Ralf Avila

On Sunday January 17, Rafael (Ralf) Avila-Torres, longtime resident of Woodburn after a long battle with Covid-19 passed peacefully in his sleep. Rafael, Ralf or Ralfi to his friends and family was born on August 21, 1957 in La Piedad, Michoacan,... View Obituary & Service Information

The family of Rafael Avila Torres created this Life Tributes page to make it easy to share your memories.