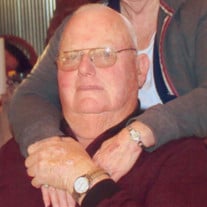 Raymond Thomas Davidson February 20, 1937 – August 24, 2018 Ray was born on a farm in St. Paul, Oregon to Eleanor and Edward Davidson. The youngest of 7 children, he lived his whole life on Davidson Road. After high school he joined the National Guard. Then, Ray started farming, running his last combine crew in July of 2018. Ray had a special interest in helping underprivileged children. He felt that because he had been so blessed, it brought him joy to help children get a good meal when they had none. He hauled cases of canned beans, corn and cups of noodles to the coast for a program that packaged them up for weekend meals during the school year. He supported 4-H and FFA projects every year. He supported St. Paul Buckaroo athletes, feeding many a team after an event. Ray also believed in supporting his community by donating money for special projects when needed. He loved his coastal community as much as his home community and treated them all as family. Ray spent countless hours surveying walnut trees for readiness to pick up, then drying, cracking and bagging them. He gave these away to family, friends and church sales. He also journeyed to Hermiston, OR each year and brought back a truck load of watermelons, cantaloupes and tomatoes that he generously gave away. Well, a lot of the tomatoes he kept and had us make salsa for him. Ray was a member of the Knights of Columbus. He spent 23 years on the St. Paul Telephone Association Board. He was a past Chairman of the Quality Trading board. After making RD Farms official in 1968 he won numerous Excellence in Seed Production awards. Survived by his wife of 60 years, JoAnn, children Sharon, Richard (Shirley), Carol (Marty) and Steven (Nancy), grandchildren Andrea (Garson), Jessica, Reid, Sara, Ryan and Tyler (Heather) and two great grandchildren Cecilia and Delilah. He is also survived by his sister Laura, and Matt (Candice) Eide who became part of our family. Ray loved God, his family, his ag community, his beach community, his coffee gang and ice cream. Ray was the epitome of a Farmer. That is all that needs to be said. He was always right, even when he wasn’t. A life well lived, he will be missed by many. Services: Tuesday August 28th, 2018 at 10:30 rosary, 11:00 mass at St. Paul Catholic Church in St. Paul, Oregon. In lieu of flowers, please make donations to the St Paul Fire Department fund, PO Box 1, St Paul, OR 97137 or Marion County Fair Foundation (4H & FFA) 12423 River Rd NE, Gervais, OR 97026 or South County Good Neighbor Program (helps underprivileged children), PO Box 700, Pacific City, OR 97135.

Raymond Thomas Davidson February 20, 1937 &#8211; August 24, 2018 Ray was born on a farm in St. Paul, Oregon to Eleanor and Edward Davidson. The youngest of 7 children, he lived his whole life on Davidson Road. After high school he joined... View Obituary & Service Information

The family of Raymond Thomas Davidson created this Life Tributes page to make it easy to share your memories.