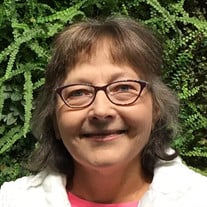 With great sorrow we lost our beloved Rebecca Aversa, who left us early Monday morning, October 8, 2018. Becky suffered from multiple myeloma for five years; she struggled valiantly with grace and acceptance, with the loving care of her husband, until the end, when she died holding a small crucifix in her hand. Rebecca Mae Kongslie was born in Bottineau, North Dakota, on December 3, 1953. She was the youngest of nine siblings born to Arthur and Mary Ann Kongslie. She spent her first seven years on a farm two miles from Upham, North Dakota, until the family moved to Culver, Oregon, in 1961, and then to Salem, Oregon, in 1966. Becky was a cheerful, energetic girl who always sang the loudest. She was an avid reader, and was always either knitting, weaving, doing needlework, or beading; her beaded sun-catchers were a favorite gift to give, and she donated countless scarves and hats to Doernbecher Children's Hospital. She graduated from McNary High School, Keizer, Oregon, in 1971, and from the University of Oregon, in 1975, with a Bachelor of Science in Teaching degree. In 1980, she earned a Reading Specialist Endorsement at Southern Oregon University in Ashland, Oregon. It was in Ashland, that summer of 1980, where she met the love of her life, Gery Aversa. The first time she saw him, she told herself this was it, she was hooked; they got married on Saturday afternoon, December 20, 1980 in Gold Hill, Oregon. Over the next five years she lived and taught first grade in Southern Oregon, and lived in Lake Placid, New York, and Manchester, Vermont, before returning to Ashland where their only son, Alan, was born in 1985. They then moved to the Portland area where she taught many years for the Portland Archdiocese. In 1987, they settled into their new home in Tualatin, Oregon, where Becky lived for the rest of her life. She is survived by her beloved husband, Gery, and her dear son Alan and daughter-in-law, Mayra, as well as five sisters: Kathleen Froeber, Edina, Minnesota; Beatrice Petersen, Harvey, North Dakota; Marilyn Kongslie, Portland Oregon; Karen Kauffman, Newport, Oregon; and Barbara Kongslie, Portland, Oregon; three brothers: Ken Kongslie, Salem, Oregon; Ron Kongslie, Portland, Oregon; and Keith Kongslie, Bend, Oregon; her mother-in-law, Alice Aversa, and her sister-in-law, Kathy Aversa, both from Medford, Oregon, as well as many, many nieces and nephews. She was preceded in death by her parents, an infant brother, Clare, and her father-in-law, Nick Aversa. A funeral mass will be held on Thursday, October 18, 2018, at 9:30 a.m., at St. Joseph's Catholic Church in Salem, Oregon, the church she attended for many years with her family. She will be buried next to her parents at Fircrest Cemetery, in Monmouth, Oregon. Remembrances can be made to the Multiple Myeloma Research Foundation, themmrf.org, or to a charity of your choice. Rebecca's husband, son, and all the family, are very grateful for all the love and support shown to her, and to them.

With great sorrow we lost our beloved Rebecca Aversa, who left us early Monday morning, October 8, 2018. Becky suffered from multiple myeloma for five years; she struggled valiantly with grace and acceptance, with the loving care of her husband,... View Obituary & Service Information

The family of Rebecca Mae Aversa created this Life Tributes page to make it easy to share your memories.

With great sorrow we lost our beloved Rebecca Aversa, who left...