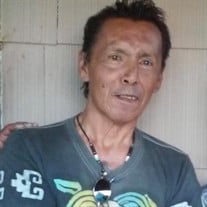 Ricardo Herrera Rivera passed away April 5th, 2019 at 11:20 pm. A celebration of his life service will be held on Friday, April 12th from 2:00 pm to 6:00 pm at the Simon-Cornwell Colonial Chapel; 390 N. 2nd Street, Woodburn, Oregon, 97071, with a Rosary at 4:30 pm. Ricardo, also known as “Ritchie” or Richard by his family in Oregon, and as “Pansas” by his family in Mexico, was born in Weslaco, Texas, April, 1st of 1954 to Epifania Herrera and Epifanio Rivera. Born in the Rio Grande Valley of southern Texas, from there he would go to Reynosa, Tamaulipas, Mexico, to Gervais Oregon; and then all over the United States, Mexico and back. He was a free spirit that loved to travel, even if that meant walking from Reynosa Tamaulipas to the Falcon Lake State Park in Texas, or from Salem to Portland; journeys he loved to talk about. He was also a Jack of all trades, working in agriculture, car shops, as a caregiver at the The Fairview Training Center, joining the National Guard and even fighting forest fires in Yellowstone National Park; all jobs he remembered fondly. He was married twice, once officially, but was not one to really settle down. In his later years he returned to Reynosa Mexico to be with family; mother and six younger siblings and then finally came back to Oregon and lived in Portland to be with his sons until his passing. He may not have had much, but he was the type of guy that would give you the shirt off of his back if you ever were in need, and he always had a story to tell. He passed away surrounded by loved ones. He will be survived by Miguel Ángel Rivera and Enrique Rivera, from his first marriage to Cynthia Swanson, and by Jazmin Gonzalez and Zulema Rivera from his long time cohabitation with Beronica Gonzalez. He has two grandchildren; Juniper Josephine Rivera and Liam Gonzalez.

The family of Ricardo Herrera Rivera created this Life Tributes page to make it easy to share your memories.