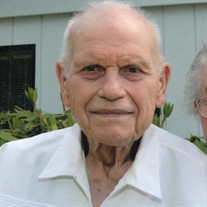 Richard Everett Armstrong, 91, passed away Thursday, August 22, 2019. He had been lovingly taken care of by his children and friends after losing his wife, Gladys earlier this year. Richard was born at Emanuel Hospital in Portland Oregon and grew up in Canby Oregon with his grandmother Nelson and his uncle George. He was a very soft spoken man but carried a big stick when needed. He loved to make dad jokes, tinker in his garage and make people happy. Though going through life with physical limitations due to polio, there was nothing that he would not tackle and succeed in. He was the ultimate DIY dad. Richard and Gladys were longtime members of The Church of Jesus Christ of Latter-day Saints and held many positions within the church. Richard shared a love of Genealogy and Family History and singing. In retirement along with his wife, Gladys, they performed a Family History Mission in Salt Lake City, Utah. Richard is survived by his four children; Evan (Dennis), Eric, Paul, and Elizabeth (Buffie), thirteen Grandchildren, and twenty-two Great Grandchildren and brother Harold Carlson. A viewing session is scheduled on Friday, August 30, 2019 from 10:00am – 12:00pm at the Simon-CornwellColonial Chapel located at 390 N. 2nd Street, Woodburn, Oregon 97071. The graveside service and internment will take place on Friday, August 30, 2019 at 1:00pm at Zion MemorialPark Cemetery located at 2010 S. Township Road, Canby, OR 97013. Flowers can be sent to the Simon-Cornwell Colonial Chapel prior to 5:00pm on Thursday, August 29, 2019. In lieu of flowers, donations can also be made to one of the following, Shriners Hospital, St Jude Children’s Research Hospital or OHSU Dornbecher Children’s Hospital in memory of Richard E. Armstrong.

Richard Everett Armstrong, 91, passed away Thursday, August 22, 2019. He had been lovingly taken care of by his children and friends after losing his wife, Gladys earlier this year. Richard was born at Emanuel Hospital in Portland Oregon and... View Obituary & Service Information

The family of Richard Everett Armstrong created this Life Tributes page to make it easy to share your memories.