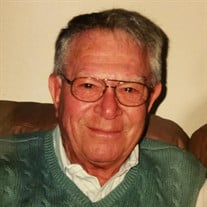 Richard L. Grassman October 1, 1928 – December 29, 2016 Richard “Rich” Lewis Grassman passed away on December 29 at his home of 61 years for reasons related to age. Rich was 88 and lived in the Gervais area for most of his life. He is survived by brother Clarence, sister Mary, four children Douglas (Carolyn), Fred (Ruth), Angie (John) and Gail, ten grandchildren and 12 great grandchildren. Rich was born October 1, 1928 to Clarence and Johanna Grassman in Gervais, the sixth of seven children. He joined the Merchant Marines in 1943 at the age of 15 and spent five years traveling the Atlantic and South Pacific before returning to Gervais where he wed Helen Louise Ireland on October 9, 1948 at St Louis Catholic Church. They were married for 62 years prior to her death in 2011. Rich worked early on as a milk deliveryman for the Mt. Angel Creamery. He was hired by Boise Cascade in Salem in the early 1950’s and spent his entire career with the company, the last decade as a Supervisor. During his final five years with Boise he completed a three year assignment in Rumford, Maine and a two year stay in Vancouver, Washington, retiring in 1986. Throughout his long tenure with Boise, he and Helen maintained a 44 acre farm, at times raising berries, cherries, livestock, row crops and their five children. Upon retirement, Rich and Helen wintered in Arizona enjoying time with family and friends, while golfing, playing 3-13 and relaxing. Throughout his life, Rich was an avid golfer, fisherman, hunter, storyteller and a dedicated father, father in law, grandfather, uncle, neighbor and friend, always available to provide wise counsel or assistance (and his own personal brand of supervision) with projects of any sort. Funeral services are scheduled for Thursday, January 5 at 10:00 AM at the St. Louis Catholic Church in St Louis. Rite of Committal will follow the service at St Louis Catholic Cemetery. A reception will occur immediately following at the St Louis Reception Hall. In lieu of flowers, remembrances can be given to the American Cancer Society or the Alzheimer’s Association.

The family of Richard Louis Grassman created this Life Tributes page to make it easy to share your memories.