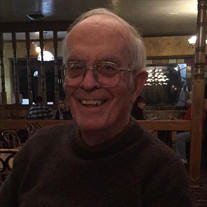 Richard Norman Murphy November 6, 1931 – December 14, 2017 Richard (Dick) Murphy, from Keizer, Oregon was born November 6, 1931, in Rockford, Illinois to Howard Coleman Murphy and Ellen Sidell Murphy. Dick suffered a massive heart attack on November 20th and died on December 14, 2017 in Salem, Oregon at the age of 86. His wife and children were at his side when he passed away. He was the fifth of five children, predeceased by all, and spent his entire childhood in Rockford. Upon graduation from East High School in Rockford, Dick traveled to Oregon to work on his Uncle’s farm near St. Paul, Oregon. Dick served in the Oregon National Guard beginning in 1950 during the Korean war and he received an honorable discharge from the service in 1956. He met Darlene (Dolly) Ostrom on a blind date on May 11, 1953 and married Dolly in 1954 at the Immanuel Lutheran Church in Woodburn. They were married for 64 years and had two children that they raised in the Woodburn area. Dick and Dolly moved to Keizer in 1999 after spending 42 years living in Woodburn. Dick began working for Portland General Electric in 1956 and retired 32 years later after starting as a residential meter reader, worked as a member of a lineman crew at PGE and was working as an Agricultural Engineering Specialist at the time of his retirement in 1988. Dick enjoyed being the handyman around the house; fixing and oftentimes refixing items that needed his attention. He enjoyed gardening and especially loved attending to the yard to keep it neatly mowed and trimmed. He also attended the Keizer Christian Church. Dick is survived by his wife of 64 years, Dolly Murphy, daughter Sandy Coleman and Steve of Canby, Oregon and son Bill Murphy and Sue of La Quinta, California. Dick had five grandchildren; Nick, Matt and Alyssa Coleman and Kenny and Danny Murphy. He also had two great-grandchildren. In lieu of flowers, the family requests donations in Dick’s name be made to your favorite charity. A viewing will be held on Wednesday, December 20th from 8:30 to 10:30 at Simon Cornwell Colonial Chapel in Woodburn. Dick’s Memorial Service will be held at the Keizer Christian Church, 6945 Wheatland Road N, Keizer, Oregon on Wednesday, December 20th at 11:00 a.m. followed by a private graveside service at the St. Paul Catholic cemetery. Dick will be remembered for his quick wit, sense of humor, hard work and dedication to his family. Dad will be greatly missed by members of his family who have relied on him for his sage advice and strength of character for decades.

The family of Richard Norman Murphy created this Life Tributes page to make it easy to share your memories.