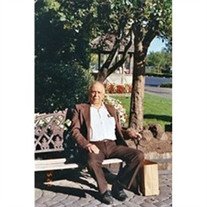 Richard passed away peacefully in the early dawn of Saturday January 4th; to his daughters he was "Papa", his family called him "Dick", & it was with his Army comrades that he became known as "Nick". Born in Covina, CA to Leo and Bessie (Betty) Nequette; and yes somewhere along his life's path the spelling of his name changed to Niquette.He was the middle of 5 children, survived by his Sister Gwen Westerman of Rogue River, OR, preceded in death by his brothers Arnold and Jerry (deceased in WWII) and a sister Betty Mesrobian.Richard left school in 1934 upon completion of the 8th grade; striking out on his becoming a butcher by trade. He was employed by American Packing and Provision Company in Ogden Utah from 1940 until 1942 as production foreman of meat packing. He joined the United States Army on October 1, 1942 and went overseas on October 7th landing in North Africa before transferring to the 248th Field Artillery 178th Brigade and went to Italy February 4, 1944 going all the way to the Austrian border. The war ended for his unit on May 5, 1945. His unit returned to Livorno, Italy setting up a staging area for rotation of troops either to be sent back to the U.S. or to the Pacific theater of operations. He re-enlisted to build an enlisted men's club for his unit before discharge on Dec 19, 1945. Encouraged to re-enlist he served again beginning December 20, 1945 then transferring to the P.B.S. for the purpose of building clubs for both the enlisted men and officers with final discharge at Fort Lewis on January 15, 1947.He married Marguerite Ayer of Romont, Switzerland May 1946. They made the long voyage over the Atlantic landing in NY then traveled across the states in an Army jeep arriving at his parent's home in Wimer, OR October 1946. raising 2 daughters Danielle & Renee. He is survived by Danielle & son-in-law Larry Slaughter of St Paul OR, RenÃ©e Niquette of Wilsonville, 5 grandchildren Scott, Brett, Tavis, Geoffrey, Ingrid and 9 great- grandchildren.""Nick returned to his trade as a butcher in Rogue River opening Nick's Quality Market after purchasing the General Merchandise and Feed store which even included a watering trough and hitching post in 1952. He added a small cafÃ© where he and Marguerite "Maggie" worked side by side for many years.His pastime was often his work and he lived the motto "Do what you love and you will never have to work another of day in your life". He was active in Rogue River's civic affairs as Fire Chief, Chamber President and City Council over the years. He with his friend the former Governor Mark Hatfield was instrumental in the promotion of today's Valley of the Rogue State Park along I-5 in Rogue River. Always an entrepreneur, he earned his Real Estate License at the time many Californians began making their move to Oregon. Grocery was not out of his blood though so it did not take long for him buy a new store Oakdale Market in Medford, OR.He was a most kind and generous man providing enough and then a bit more for his girls & family, always ready and willing to help those in need in the community. He enjoyed the simple pleasures of family picnics and fishing. Trips along the Smith River and Brookings were special family times.Life's path took to California; he married his friend Patricia Watt of Fresno CA in 1986, becoming a widower November 2010. He shared in the lives of Patricia's two married children Mike Watt & wife Gwen, Colleen Williams & husband John, 3 grandchildren Becky, Carrie and Brian & 3 great grandchildren all of Fresno CA.He continued his ventures in grocery and restaurant before retiring in 1994. Idleness was not in his genes so encouraged to attend Clovis Adult School in CA, he earned his High School Diploma as Valedictorian of his class in June 1993 at age 72. He mastered some PC skills and created his own business website. Together he and Patricia enjoyed some special trips and Patricia, who enjoyed painting, drew out Richard's hidden artistic talent in oil painting. His last 3 years brought him back to Oregon to be with his daughters and their families.He was loved and will be missed very much.Richard "Nick" S. Niquette ,Will be honored with Military burial at Eagle Point National Cemetery in late March

Richard passed away peacefully in the early dawn of Saturday January 4th; to his daughters he was "Papa", his family called him "Dick", & it was with his Army comrades that he became known as "Nick". Born in Covina, CA to Leo and Bessie (Betty)... View Obituary & Service Information

The family of Richard Stanley Niquette created this Life Tributes page to make it easy to share your memories.

Richard passed away peacefully in the early dawn of Saturday...