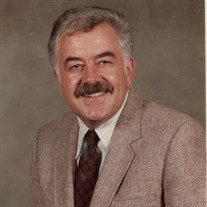 Robert Lee (Bob) Withers It is with very heavy hearts that the family of Bob Withers announces his passing. Bob left this earth on August 3 at 9:15 PM while two of his sons held his hands. It was very peaceful. It was time that his struggle... View Obituary & Service Information

The family of Robert Lee Withers created this Life Tributes page to make it easy to share your memories.

It is with very heavy hearts that...