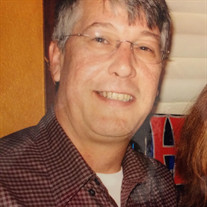 Ronald Alan Boyd, 59, passed away unexpectedly on February 17, 2017 at his home in Tualatin, Oregon after a short illness. He was born on August 22, 1957 in Portland, Oregon to Ronald Carl and Frances Kay (Hamilton) Boyd. Ron grew up and attended school in Portland and Beaverton, Oregon. He took specialized coursework in electronics to qualify for his chosen career.For many years Ron provided support for commercial systems in Oregon and Washington.He was Network Technician for KAI USA Ltd. at their headquarters in Tualatin, Oregon at the time of his death. Ron married Therese Marie “Terri” Ellis in 1977 in Vancouver, Washington. They were happily married for 40 years. Ron was a music lover, playing piano and guitar in his leisure, and was an avid amateur photographer. He utilized his enjoyment of skiing by serving with the Mount Hood Ski Patrol for several years. Ron was very pleased when he earned licensure as an amateur radio operator. Another pastime he enjoyed was performing magic tricks and associating with other magicians. In 2016 Ron began taking flying lessons. Ron was preceded in death by his father Ronald C. Boydand by his son Sean David Boyd. Ron is survived by his wife “Terri” of Tualatin, Oregon; his son Alan of Las Vegas, Nevada;his brother William (Mary) Boyd of Portland, Oregon; his mother Frances Boyd of Vancouver, Washington; his grandchildren Sean Boyd, Madison Boyd, and MacKenzie Boyd; and his many nieces, nephews, aunts, uncles, and cousins. Friends are invited to a memorial service that will be held at Cornwell Wilsonville Funeral Chapel at 29222 SW Town Center Loop E. in Wilsonville, Oregon at 12 noon February 25, 2017. Viewing will take place beforehand from 10:00 a.m. until noon. Burial will follow at Crescent Grove Cemetery in Tualatin, Oregon.

Ronald Alan Boyd, 59, passed away unexpectedly on February 17, 2017 at his home in Tualatin, Oregon after a short illness. He was born on August 22, 1957 in Portland, Oregon to Ronald Carl and Frances Kay (Hamilton) Boyd. Ron grew up and attended... View Obituary & Service Information

The family of Ronald Alan Boyd created this Life Tributes page to make it easy to share your memories.