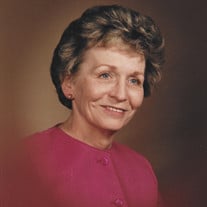 Rosemary Ruth Reilly March 1, 1931 - April 27, 2017 Rosemary Ruth (McMackin) Reilly passed away at the wise age of 86. She was a resident of Hillsboro, Oregon, but had previously graced Woodburn, OR , Lynwood, WA, Post Falls, ID, and St Joseph, MO with her charming presence. Rose was born in St. Joseph, Missouri to Mary and Earl McMackin. The third of four children, she was preceded in death by her older siblings, Earl and Betty, and younger brother, Eugene. Soon after her family moved to Idaho she met Gerald Reilly, as students at Post Falls Elementary. The two friends were married many years later on September 10th, 1949, and she gave birth to Terrance Edward and Karen Marie shortly after. They moved from Post Falls to Lynnwood where she enjoyed motherhood, a career, entertaining, crafting, crocheting, bird watching, and traveling. She thoroughly treasured children and being a dedicated grandmother; always ready for fun and adventure. After retiring Rose and Jerry moved to Woodburn, where they continued to enjoy loved ones, happy hour, golf, and yearly travel south. Rose had a lifelong penchant for singing and dancing, with a catalog of ditties and jokes at the ready to entertain those around her. Even as her memory faded her lyrical prowess and perfect pitch never did. Throughout her life she often serenaded those around her. She was a skilled cribbage player, enjoyed Zumba and line dancing, and was an avid animal lover. Rose was married to her sweetheart, Jerry, for 68 years; a beautiful love story. Her son, Terry, passed away in 2012 and was dearly missed by Rose each day. She is survived by daughter, Karen Jamieson (Daniel), her grandchildren, Ryan Jamieson (Jennifer), Heather Jamieson Sheriff (Foday), Alyse Jamieson and great-grandchildren, Sam, Jake, and Amilah Rose, as well as many loving nieces and nephews. She was a vibrant, lovely woman, inside and out, and she will be deeply missed by her friends and family. Services to be held at 12:00 p.m., Saturday, May 20, 2017 at Simon-Cornwell Colonial Chapel, Woodburn, Oregon. Reception to follow. Donations can be made in her honor to the Humane Society of Oregon.

The family of Rosemary Ruth Reilly created this Life Tributes page to make it easy to share your memories.