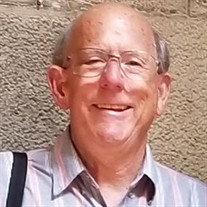 Steve Wayne Reinsch of Woodburn, Oregon passed away Sunday morning November 14, 2021, at the age of 72 at Emanuel Hospital in Portland, OR. He was born in Palo Alto, California on October 10, 1949 to Wayne and Marjorie Reinsch. He graduated from Redondo Beach High School in 1967 and went on to work at Thrifty’s while attending college at El Camino Junior College and University of Southern California (USC). Steve married his first wife, Sherri Adams, with whom he had two children, Michael, and Amanda. In 1978, Steve moved with his wife, kids, and Sherri’s family to Oregon. After a brief second marriage in the 1980s, he met the love of his life, Linda, and focused on the most important things in his life, i.e., being a devoted husband, loving father, grandfather, great-grandfather, and man of God. Before retirement in 2012, Steve worked as a night crew Foreman, Manager, and Checker for Roth’s IGA in Salem, Oregon for 11 years, and Mega Foods in Woodburn, Oregon for 21 years as Point of Sale manager, Assistant Manager, Merchandising, and Receiving Clerk. During his career he also received a Certificate of Paralegal Studies from Portland Community College. In retirement he was able to focus all his energy on family, church, Scouts, travel, and hobbies. Hobbies included, but were not limited to, collecting a substantial quantity of ceramic light houses, Disc Golf, Golf, hiking (with noted excursions at the Enchantments, the Oregon Cascades, and Mt. St. Helens), and camping. He and his wife Linda cherished their travels to Alaska, New York City, Washington D.C., Central America, and Europe. Steve was active in the Boy Scouts of America organization for 12+ years in a wide variety of capacities. Starting in the 1980’s leading the scout den his son Michael was in. Then from 2008-2020 with Pack 624 in Aurora and Troup 258 in Canby with his grandson, Kaleb Schiedler, whom he mentored through the process of attaining the rank of Eagle Scout. Through his many years of active involvement as Camping Coordinator and Scoutmaster/Assistant Scoutmaster, he touched the lives of many people promoting goodwill and conservation within his community as well as sharing his love of nature with younger generations. Steve’s Christian faith began as a young boy when he would get up Sunday mornings, put on his “little suit, tie and Sunday shoes” (as he described them), and walked, by himself, to the neighborhood Methodist Church Sunday School. He said his parents were not churchgoers so he couldn’t remember why or how this routine started which continued for several months. The one thing he never forgot was the song, “Yes, Jesus Loves Me” which became his favorite hymn. In his formative years, Steve’s faith was nurtured through annual trips with the YMCA Summer Camping Program. The next 20 yrs. were filled with college, hard work, marriage, raising children, and occasional scripture reading. In 1998, eight years after his second marriage ended, Steve was invited to Christmas Eve mass at St Luke Catholic Church in Woodburn, OR, where a mutual friend introduced him to Linda Fina, a parish member. Five months later on June 12, 1999, they were married, and Steve decided to learn more about Catholicism. After attending RCIA classes, he deeply embraced the faith at Easter Vigil Mass in 2000, when he received the sacraments of Baptism, Holy Communion, and Confirmation. Steve served as a Lector (scripture reader at mass), a member of the St Luke Cemetery Board, and helped on parish projects. Many times, during their marriage, Steve would say how blessed he felt to have a permanent church family. With Linda and Amanda by his side, in his last moments, Linda said she was comforted by a brief mental image of Jesus smiling, as her “Sweetheart” went to his heavenly home. Steve was preceded in death by his parents; in-laws; his brother Jack Reinsch; grandson Andrew Reinsch; and first wife, Sherri Reinsch. He is survived by his loving and devoted wife, Linda Reinsch; sister-in-law Denise Fina; son Michael Reinsch and his wife Jen; daughter Amanda Reinsch; beloved grandchildren Kevin Wilks; Arin Reinsch; Jordan Ramos and her husband Miguel Dominguez y Ramos; Julia Reinsch; Kaleb Schiedler; and great-grandsons Aiden and Anthony Ramos. Funeral Mass was Tues. 11/23/21 in St. Luke Church with Burial Service at St Luke Cemetery, in Woodburn, OR. In lieu of flowers, donations are welcome to these local charities which Steve supported: The AWARE Food Bank (154 Harrison St, Woodburn, OR 97071), St. Luke Church- Woodburn, (417 Harrison St, Woodburn OR 97071), Cascade Pacific Council (Boy Scouts of America), 2145 SW Naito Pkwy, Portland, OR 97201.

Steve Wayne Reinsch of Woodburn, Oregon passed away Sunday morning November 14, 2021, at the age of 72 at Emanuel Hospital in Portland, OR. He was born in Palo Alto, California on October 10, 1949 to Wayne and Marjorie Reinsch. He graduated... View Obituary & Service Information

The family of Steven Wayne Reinsch created this Life Tributes page to make it easy to share your memories.