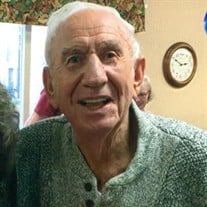 Thomas Frank Fender of Woodburn was born June 5, 1928 in Flag Pond Tennessee, (the second of four children, Margery, Thomas, Peggy and Jack) to Addie and Winfred Fender. Tom was raised in Flag Pond, TN and served in the U.S. Marine Corp and moved to Oregon to be a logger in the late 1940’s. He met Evelyn Mallatt in 1948 and they married in 1950. He and Evelyn had three children, Robert (Bob) and twins, Kathryn (Kathy) and Joseph (Joe). Tom, TF, or Tommy, as he was known to some, began his iron worker career in the early 1950’s for Young Brothers and then moved on to Fought and Company where he retired after 30 plus years of hard work. Tom and Evelyn raised Christmas Trees and always had a huge garden which they loved to share with everyone and always had a beautiful lawn with beautiful flowers. Tom was a dedicated Christian, Father, Grandfather and Great Grandfather, who cared so much about his family and his church family. He always made everyone laugh and always had a smile to share along with a story! His other passion was deer and elk hunting and fishing. He had many pictures and even more hunting stories. When Evelyn passed away in 2013 Tom moved in with his grandson Jason and his wife Sara and son Dillon, who took wonderful care of him, and from there, he moved to Cascade Park Retirement in Woodburn, OR. He enjoyed his years at Cascade Park where he was treated with kindness and dignity. He also made many new friends there. Tom passed away on December 8, 2018, at the age of 90. He was preceded in death by his wife, Evelyn, his parents, Addie and Winfred Fender and sister Margery Shelton. He is survived by his children, Robert Fender (Chris), of Madras OR, Kathy Ward (Dennis) of Gervais, OR, and Joe Fender (Linda) of Wilsonville, OR, sister, Peggy Belcher of Georgia, brother, Jack Fender, of Florida. He is also survived by his grandchildren, Aimee Beachy (Jon), Thomas Fender II (Mary Beth), Jason Fender (Sara) and their mom, Linda Fender. Shawna Dennis (Matt), Jack Fender and their mom Sally. Amber Petersen (James), and step grandchildren James Kramer (Shelly) and Elizabeth Kramer (Keith). Tom also had fourteen great grandchildren. Services will be held at 11am Monday December 17th at Mid Valley Community Church in Woodburn, OR, with private interment at Willamette National Cemetery in Portland on Tuesday. Arrangements by Cornwell Colonial Chapel. In lieu of flowers please make any donations to Willamette Valley Hospice or Mid Valley Community Church.

Thomas Frank Fender of Woodburn was born June 5, 1928 in Flag Pond Tennessee, (the second of four children, Margery, Thomas, Peggy and Jack) to Addie and Winfred Fender. Tom was raised in Flag Pond, TN and served in the U.S. Marine Corp and... View Obituary & Service Information

The family of Thomas Frank Fender created this Life Tributes page to make it easy to share your memories.