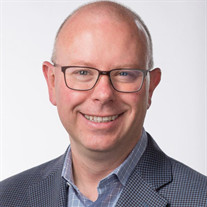 Clint “Travis” Talbot May 5, 1972 – January 9, 2019 Travis Talbot was born on May 5, 1972 to Steve and Nancy Talbot, in Lakeview Oregon, the first of 2 children. The family moved to Woodburn Oregon in 1976 and Travis was raised and educated there, graduating from Woodburn High School in 1990. In 1992 Travis was blessed with the birth of his first daughter, Paige. In 1994 he was blessed again with the birth of his 2nd daughter, Abigail. He worked in a variety of Administrative positions in the 90’s. In the early 2000’s, while working full time, he began his higher educational pursuit and earned his Bachelor of Arts Degree in 2005 followed by his Master’s in Business Administration in 2009 from George Fox University. Travis was offered an opportunity in 2007 with Windermere Realty. He began in an Administrative role and quickly worked his way up in the organization becoming CFO and then to his final position of Co-Owner/Executive Vice President. He was able to help others realize their potential for growth and help them achieve their developmental goals while in his role at Windermere. He was respected and loved by many in his work. Travis loved to play golf, travel, cook & entertain and was a wine enthusiast. He made many international trips including China, Italy, France, Spain, Mexico & Peru. He traveled for his job as well as for pleasure and many of his pleasure trips were spent in the bay area of California with groups of friends and family, exploring the vineyards of the Napa Valley. He loved to prepare meals and entertain and especially enjoyed spending time in the kitchen with his daughter, Abigail, on meal preparations and trying out new recipes. A few years ago, Travis made a decision to train and run in the New York City Marathon. He achieved that goal on Nov 4, 2018 and it was his parents’ great pleasure to see him cross that finish line. Prior to the marathon he logged several hundred miles training and enjoyed running with his daughter, Paige, who ran a few half marathons at his side. Travis served on the Board for the Portland Art Museum and volunteered for a variety of community services including Habitat for Humanity, Children’s Justice Center and New Avenues for Youth. He contributed to several non-profit fundraisers including Love INC of North Marion County, Black Parent Initiative, Girls Inc of the Pacific Northwest, Goodwill, Children’s Cancer Association, Bridge Meadows and the Windermere Foundation. Travis is survived by his parents, Steve and Nancy Talbot of Woodburn, OR; daughter and her partner, Paige Talbot and Chris O’Dell of Salem, OR; daughter & son in law, Abigail & Zane Franklin of Los Angeles, CA; sister & brother in law, Kristine & Zachary Poole of Aurora, OR and niece & nephew, Taylor and Brayden Poole. He is also survived by aunts, uncles and cousins. A Celebration of Life was held for Travis on Sunday, January 13, at the Willamette Valley Country Club in Canby, OR. In lieu of flowers, please consider donations to New Avenues for Youth in Portland, or a charity of your choice.

The family of Travis Talbot created this Life Tributes page to make it easy to share your memories.