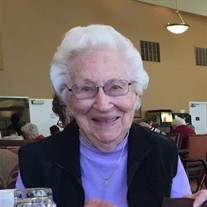 Velda Lorraine Goodwin 1925-2017 Velda Lorraine Goodwin, 91, died peacefully under the care of Legacy Meridian Park Hospital on April 22, 2017. Lorraine was born December 5, 1925 in Marshfield, Oregon to George Raymond and Bethel Norris. She spent the first 87 years of her life in Coos County, living in Fairview and Coquille. She graduated from Coquille High School in 1943 and married her high school sweetheart, Elmer W. Goodwin, Jr., on February 3, 1946. Lorraine worked at Georgia Pacific mill in the early years of her marriage before becoming a full time homemaker and mother. She also worked part-time in the Lincoln Elementary School cafeteria as a server - a job she really enjoyed, retiring in 1987. Lorraine was a long time and very active member of the Coquille Christian Community Church in Coquille. She enjoyed serving in the church in a variety of ways. In retirement, Lorraine and her husband could often be found at the church painting and doing yard work. She especially enjoyed her yard, growing vegetables, fruits and flowers. She was well known for her homemade pies, rolls, and cookies. In 2013, Lorraine and Elmer moved to Wilsonville, Oregon to be near their daughter Denise Doty. Lorraine is survived by her daughter and son-in-law, Denise and Loren Doty of Wilsonville, OR; two granddaughters, Angela Doty of Springfield, OR and Deanna Doty of Beaverton, OR. She was preceded in death by her husband, Elmer Goodwin in 2015 and a daughter, Linda at age 3. A Celebration of Life Service will be held April 29, 2017, at 2:30 pm at Tualatin Hills Christian Church, 23050 SW Boones Ferry Road, Tualatin, OR 97062. Gifts in memory of Lorraine may be given to the Camp Scholarship Fund of Tualatin Hills Christian Church. Arrangements are under the direction of Cornwell Colonial Chapel in Wilsonville, OR, 503-682-1177.

The family of Velda Lorraine Goodwin created this Life Tributes page to make it easy to share your memories.