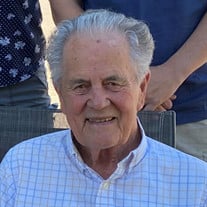 In Loving Memory Walter Wilmes was born January 10, 1928 in Hubbard, Oregon and passed away at home on Saturday, June 18, 2022 surrounded by family. Walter was the fourth of seven children, born to Joseph and Emilie Wilmes. He graduated from Arbor Grove School and attended St. Paul High. He was as likely to be found taking care of the turkeys or working in the field as he was to be out on the football or baseball field. After high school he was drafted into the army and served during the Korean War, stationed mostly in Germany. Upon returning, he began farming, where he worked his entire life. He met the love of his life, Kathleen Dardis, at a Mt. Angel dance and they married shortly after on October 8, 1955, and together raised their four children. He enjoyed skiing, family trips, dancing, collecting his old cars and spending time with his famiily. He was a member of St. Paul Parrish and was a volunteer fireman at Broadacres for many years. He is survived by his wife of 66 years, his children Janice (Jim) Long, Linda Wilmes (Carl) Smith, Greg (Kathy) Wilmes, Karen (Tim) Herinckx, grandchildren Jennifer and Mark Long, Brittany (Ryan) Arthur, Erika (Jonathan) Willis, Aubrey and Jessica Wilmes, Eliza, Reilly and Thomas Smith and Colton and Natali Herinckx, and great-grandchildren Kai, Preston and Maya Willis and Maeve Arthur. Preceding him in death were his parents, siblings and grandson Ryan Wilmes. Funeral services will be held outdoors at the St. Paul cemetery on Monday, June 27. Recitation of the rosary will begin at 10:30 with a Catholic funeral mass following at 11:00. There will be a reception following at the Bull Pen at the rodeo grounds in St. Paul, Oregon. In lieu of flowers, donations can be made in his name to Willamette Vital Health, St. Paul Fire Department or charity of your choice.

In Loving Memory Walter Wilmes was born January 10, 1928 in Hubbard, Oregon and passed away at home on Saturday, June 18, 2022 surrounded by family. Walter was the fourth of seven children, born to Joseph and Emilie Wilmes. He graduated from... View Obituary & Service Information

The family of Walter Wilmes created this Life Tributes page to make it easy to share your memories.