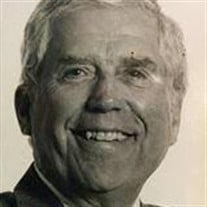 William James (Bill) Chambers, born October 11th, 1932 in Mason City, Iowa, passed away on September 14th 2016 after a brief illness, in Portland Oregon. He was the son of Robert Edson (Bob) Chambers and Louise Alice (Lennan) Chambers. Bill is survived by his wife of 54 years, Connie, 3 children, sons Timothy, Thomas, daughter Julie, as well as 3 grandchildren, Kelsey. Brittney, and Nicholas. Bill graduated from Iowa State University NROTC in 1955 and served in the United States Navy for 2 years as Weapons Officer on the USS Rainier. After his time in the Navy, Bill decided to start his career in the investment world, a decision that would serve him well. He started off with E.F. Hutton in San Jose, and then opened a new office in Palo Alto California, and a few years later established E.F. Hutton’s first Northwest presence in Portland, Oregon. By the time Bill retired, E.F. Hutton evolved through several different companies ending with Morgan Stanley. After Bill semi-retired, his Iowa roots started calling, and he found peace and happiness raising Elephant garlic, which won the blue and red ribbons at the Oregon state fair several times. Bill's farming led him to find great joy brokering the best produce the Willamette valley had to offer to restaurants in the Portland area. Bill enjoyed an adventurous lifestyle, from flying an airplane to motorcycling. Perhaps his greatest enjoyment was in motor homing. Bill and Connie’s motor home adventures brought them across Canada and the United States, often times visiting friends and family. Bill also was passionate about duck hunting and fishing. Bill’s greatest joy however, was doing anything with his family. Bill had a deep faith in God which he shared with family and friends. Bill was especially humbled to work with the Monk’s at Our Lady of Guadalupe Trappist Abbey. He also supported many different philanthropic pursuits, giving much in the way of financial guidance and advice, work in the Catholic Church, scholarships, donations, and counseling. Bill’s Celebration of Life will be held Saturday, October 22nd at 11:00am, at Our Lady of the Lake Catholic Church in Lake Oswego, Oregon. Followed immediately by reception, then interment. Please come help celebrate the life of this great man. In lieu of flowers, donations can be made in Bill’s honor StJudeScholarshipFund:https://staparish.weshareonline.org/ws/opportunities/SaintJude scolarshipfundinMemoryofBillChambers Or the Mt. Angel Seminary at Mt. Angel Abbey: https://www.mountangelabbey.org/donate-to-seminary/ OLL WEBSITE: http://ollparish.com/index.html Sacred Heart Cemetery: http://ollparish.com/sacred-heart-cemetery.html

The family of Mr. William James Chambers created this Life Tributes page to make it easy to share your memories.